Follow these rules when flying as a hobbyist in the US

Per the FAA Reauthorization Act of 2018 and Exception for Limited Recreational Operations of Unmanned Aircraft notice, the FAA currently requires hobbyists to follow theses rules:

Note: On October 5, 2018, the President signed the FAA Reauthorization Act of 2018. The Act establishes new conditions for recreational use of drones and immediately repeals the Special Rule for Model Aircraft.

Note: You can only fly as a hobbyist if you’re doing something that does not involve making money and/or furthering a business. If you’d like to fly commercially, you’ll need a Remote Pilot Certificate and you’ll need to follow the Part 107 rules. See more details here.


How to Register Your Drone

If you’ll only be flying as a hobbyist, you should register under the “Exception for Recreational Flyers” on the FAA’s website here. The registration fee is $5 and the registration needs to be renewed every 3 years. All of your drones (weighing 0.55 lbs or more) should be marked with your FAA registration number.

After you complete the registration process, you should receive a copy of your registration information via email. If you ever lose that information, you can find it by logging into your FAA account on this page at the top, right.

You must keep a copy of your registration information (either a hard copy or electronic copy) on your person when flying and make it available to FAA inspectors or law enforcement officials upon request.

Note: If you accidentally register under “Part 107”, you’ll only be able to use your registration number for the drone you entered during the registration process. You can also fly as a hobbyist with that type of registration.

Note: The original drone registration requirement was invalidated in May 2017 (see more details here). The requirement was later reinstated by H.R.2810, Section 1092 (d) in December 2017.


Labeling Your Drone with Your FAA Registration Number

You can mark your FAA registration number on your drone(s) with a label, marker, or engrave it. If you think you’ll ever sell your drone, then marking it with a label that can be removed later would be the best way to go.

Per the External Marking Requirement rule, your FAA registration number must be marked on any external surface of your drone and the number must be maintained in a condition that is readable and legible upon close visual inspection. 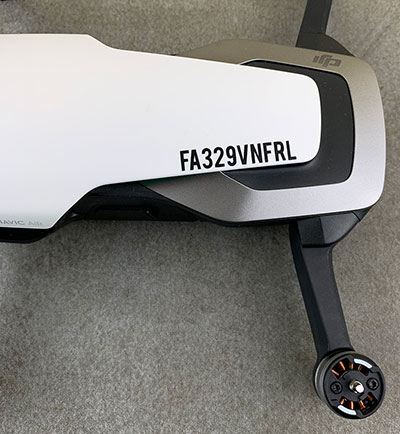 Note: If you don’t have a label maker, you can purchase tiny, inexpensive FAA registration labels here. Or purchase weatherproof vinyl decals here.


Keeping Your Drone in Visual Line of Sight

Per Section 107.31, the person operating the drone is required to maintain visual line of sight (VLOS) with the drone throughout the entire flight. That means you should be able to see your drone with vision that is unaided by any device other than glasses or contacts. See more details here.

The FAA also allows a visual observer (VO) to maintain VLOS. The VO must be near the operator and be able to communicate verbally without the assistance of an electronic device. Using a VO generally is optional, but a VO is required if the operator is wearing FPV glasses/goggles that make it impossible to maintain VLOS.

You’ll be able to spot your drone easier during the day and night by attaching some type of bright lights to the body or landing gear of the drone. STROBON Cree strobe lights are one of the most commonly used lights and are currently the smallest, brightest strobe light available.

The FAA Reauthorization Act of 2018 requires the FAA and community-based aeromodelling organizations (CBOs) to coordinate the development of safety guidelines for recreational small unmanned aircraft operations. As of today, no recognized CBOs or coordinated safety guidelines exist. Until the FAA establishes the criteria and process and begins recognizing CBOs, they are allowing pilots to do one of the following:

Note: When following the rules of a CBO (or aeromodelling organization), you should be able to explain to an FAA inspector or law enforcement official which safety guidelines you are following.

Class G airspace is uncontrolled airspace in which the FAA does not provide air traffic services. You may operate your drone in this airspace up to an altitude of 400 feet above ground level (AGL).

Note: You must avoid all aircraft that are operating in this uncontrolled airspace (especially around helipads and airstrips).

Classes B, C, D, and E Surface are controlled airspace. The FAA has created different classes of airspace to reflect whether aircraft receive air traffic control services and to note levels of complexity, traffic density, equipment, and operating requirements that exist for aircraft flying through different parts of controlled airspace. These airspace classes are usually found near airports.

In order to fly in controlled airspace, you must do one of the following:


Staying out of restricted airspace

The DJI GEO system displays zones of various risk levels in DJI GO in which flight may pose safety or security concerns. While some of these zones restrict DJI drones from entering, the fact that you are able to fly in a location does not mean it’s legal to fly in that location.

Here are some other commonly restricted areas:

Note: A current list of restricted airspace can be found on the FAA UAS Data map.


Power of the FAA

The FAA’s safety mandate under 49 U.S.C. § 40103 requires it to regulate aircraft operations conducted in the National Airspace System (NAS), which include UAS operations, to protect persons and property on the round, and to prevent collisions between aircraft or between aircraft and other objects. FAA regulations prohibit any person from operating an aircraft in a careless or reckless manner so as to endanger the life or property of another. See more details here.

Power of Local Cities and Municipalities

In this press release, the FAA explains the power cities and municipalities have over drone flights. They are only able to prohibit taking off and landing on land they own. They are not permitted to have their own rules or regulations governing the operation of aircraft.

Following the rules above will both ensure you’re obeying US law and help you operate your drone safely. Keep in mind that the FAA has the authority to pursue enforcement action against people operating drones in a manner that they determine endangers the safety of the national airspace system (NAS). You could be liable if you harm other people and/or property even if you follow all of the rules above.

In the FAA’s Drone Safety Tips, they recommend that you: